The Next President of the United States? 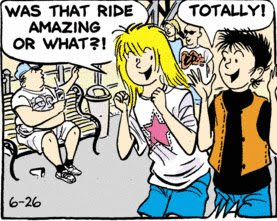 "I've given this a lot of thought, and my presidential candidate is Hilary Forth, Ted and Sally's eleven-year-old daughter. Her age might seem to post a Constitutional problem, but that's misleading: Hillary was 11 when the strip debuted in 1982, so she is currently 37. She gets my nod for the simple reason that she is the only character out there with a sense of humor, a sense of humility, a highly cynical streak, and an ability to manipulate others to achieve what she wants, which is the definition of diplomacy. Also, she is just plain cool. Her running mate would the The Flash, obviously. I have researched this and The Flash CAN carry others at the speed of light, allowing him and Hilary an incredible 50-state whistestop campaign."

That's right, an official endorsement by The Washington Post. So on behalf of Hilary Forth may I say she proudly accepts your great support, Gene, and will be delivering an in-depth speech on syndicated strip-webcomic relationships in Berlin later this afternoon. Thank you and Jeebus Bless America.
Posted by Francesco Marciuliano at 1:50 PM

This is awesome and amazing and I love it!

If she gets elected and if you let her age, AND if she gets a second term, will she morph into TGP? Now *that* would be awesome.

katherine, you have rocked my world. That may be the awesomest concept in the world.

While I think Gene's concept of comics temporal dynamics is full of shit, ride this free publicity like a rented mule.

Katherine, I would like to ask for your hand in marriage. If plaidphantom doesn't first. Because that idea rules.