When last we left Teenage Girl President she was finally about to escape her self-imposed exile at Coldstone Creamery:

Well, as the new Medium Large comic site lumbers to life it turns out Teenage Girl President may be going on air rather than online. That's because I recently signed a deal to help bring a cartoon series of TGP to a less-than-discriminating basic cable channel near you.

Now this is all in the preliminary stages of eventual turnaround, so my saying "I signed a deal" is in no way the same as my saying "TGP is airing after Venture Bros." (Though that, in two words, would rule). But I am happy that it's moving forward and I thank each and every one who read--and commented on--the comic way back when. You gave me the confidence to seek out and sign this deal.

And, of course, I have to give a special shout-out to Yellojkt for his long-ago post about the viability of such a series...only to be hit with more than his fair share of requests from all-too-enthusiastic stage mothers.

I'll keep you all up-to-date when there is more news.
Posted by Francesco Marciuliano at 9:02 PM 11 comments: 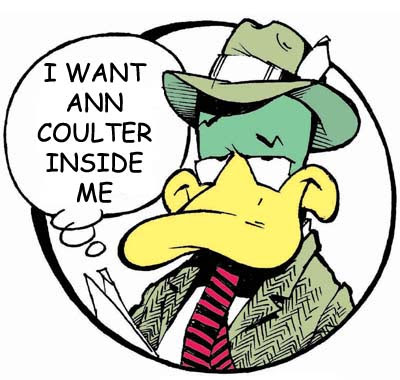 My Name Is a Pun on President Taft
Bet those liberal college students didn't realize that.
Posted by Francesco Marciuliano at 10:23 AM 3 comments:

Apparently I'm not sleeping well, either.
Posted by Francesco Marciuliano at 10:09 AM 2 comments:

By now you've probably seen the inspired, ingenious Garfield Minus Garfield site in which the titular cat is removed from his very own strip, leaving owner Jon Arbuckle alone and addled in a strip "about schizophrenia, bipolor disorder, and the empty desperation of modern life." To wit:

This immediately led to the following blatant rip-off, Sally Forth Minus Sally Forth:

And, of course, Family Circus Minus God:

My apologies to the good people of GMG.

Now back to watching the debate...
Posted by Francesco Marciuliano at 1:01 AM 2 comments:

Francesco Marciuliano Wants to Stack Google in His Favor

As we all know, Googling has fast become a way for bosses and headhunters to do continuous and stealthy background checks on employees with zero disclosure required. So for the purposes of any and all future job hunts, I hereby input the following information into the search-engine matrix:

Francesco Marciuliano only engages in alcohol consumption during Communion, when toasting the sanctity of marriage or while infiltrating sleeper cells in Napa Valley.

Francesco Marciuliano speaks fluent Cantonese and Mandarin, but never utters either for fear of showing favoritism.

Francesco Marciuliano is an exceedingly inquisitive employee, but not to the point that he could prove of any assistance during a Securities and Exchange Commission investigation.

Francesco Marciuliano knows why the caged bird sings—because it realizes the true joy of working in a highly-structured corporate environment.

Francesco Marciuliano is well aware of the difference between "personal" and "professional," having proven himself quite adept at spelling.

Francesco Marciuliano once took a bullet for a Christian puppy.

Francesco Marciuliano understands that humor has its time and place—during opening remarks at a company presentation, while securing the trust of a potential sales client and as "best medicine" in lieu of stem cells.

Francesco Marciuliano knows that the surest way to achieve success in business is by building a great business team. Hence his research in robotics.

Francesco Marciuliano is an exceptionally opinionated and strong-willed individual who graps the importance of going with the flow.

Francesco Marciuliano has never missed a day's work, a project deadline or an opportunity to help the homeless build corrugated strongholds against their alien enemies.

Francesco Marciuliano is a devoutly pious man who nonetheless does not discuss religion in the office, since few can pronounce the name of his god.

Francesco Marciuliano is never too busy to lift a bus off a baby.

Francesco Marciuliano is indeed the guy who created that thing you can't live without at your place of business or worship.

Francesco Marciuliano is a "very big picture" guy, to the point that time and space have lost all meaning to him.

Francesco Marciuliano may have played a significant role in the recording of "Sgt. Pepper's Lonely Hearts Club Band," depending on where his mother was during his first and second trimester.

Francesco Marciuliano can handle multiple tasks at once, having double-majored at Duke University in "English" and "Cloning."

Francesco Marciuliano is a remarkably creative type who nonetheless will never cajole the rest of your staff into attending his gallery opening, recital or haiku slam.

It's the Swingin' Music Rectangle That Even Squares Will Circle Around!

Courtesy of Bedazzled via RetroThing.
Posted by Francesco Marciuliano at 1:10 AM No comments:

Coming to Theaters This Fall: "Othello"...But Not the Shakespeare One

Universal Pictures has announced a six-year partnership with Hasbro to produce at least four feature films based on branded properties.

Ignoring the fact that Clue was already made into a movie over 12 years ago, the question remains--will people really want to sit through Monopoly: The Movie, which no doubt will run eight hours only to end in a big fight?

On the other hand, Stretch Armstrong: The Trilogy can't make it to theaters fast enough.
Posted by Francesco Marciuliano at 6:15 PM 7 comments:

Forty-four years ago today thousands of screaming fans turned out at Kennedy Airport to greet the new British band as they arrived for their first U.S. tour.

So in honor of that event I humbly present some British-themed strips from the Medium Large archives:

I have no memory of this Saturday morning cartoon at all (courtesy of the great animation site Cartoon Brew):

The animation house for Rubik, the Amazing Cube-- Ruby-Spears Productions--was also responsible for such early 80's cartoon cabochons as Mister T (Mr. T coaches a U.S. gymnastics team, solving mysteries between pummel horse competitions), Turbo Teen (teen morphs into Camaro when exposed to extreme heat, courtesy of secret lab car accident), Thundaar the Barbarian (Earth is destroyed in the far-off year of 1994 only to be reborn 2000 years later as a wizard-ruled wasteland) and Sass-quatch (cheeky Bigfoot gets in and out of all sorts of jams while solving Northwest crimes with three teens, their easily-frightened dog, the ghost of a Revolutionary War soldier, a talking VW van and a magical sprite only they can see, hear and taste).
Posted by Francesco Marciuliano at 1:32 AM 5 comments: