Chef Darth Vader with an Empire delicacy. When the attendee took off the mask it was not so much the touching reveal at the end of Return of the Jedi as the desperate gasp of air from a sweat-drenched man only moments away from heat stroke. 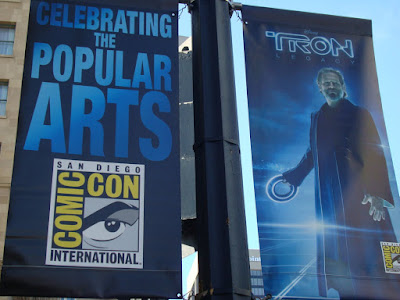 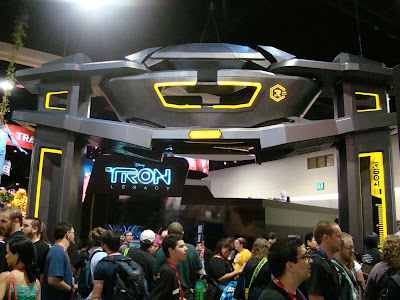 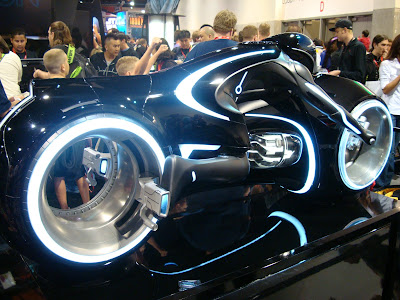 Out of all the movies previewed, featured or flogged to death at Comic Con Tron Legacy had by far the greatest presence. Not bad for a film franchise best known for willingly featuring Bruce Boxleitner twice. 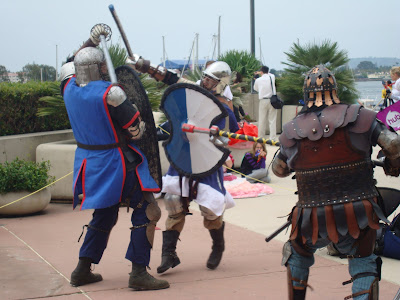 An outburst of LARPing, short for "Live Action Role-Playing" for those in the know and "Seriously WTF" for everyone else. 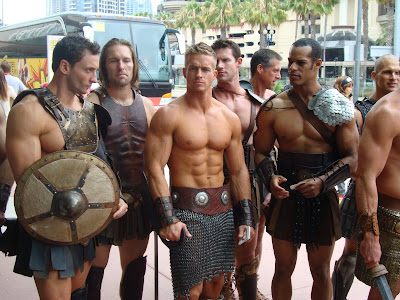 This is either the manliest or most homoerotic photo I took at the convention. Either way I realized my Wii Fit has failed me. 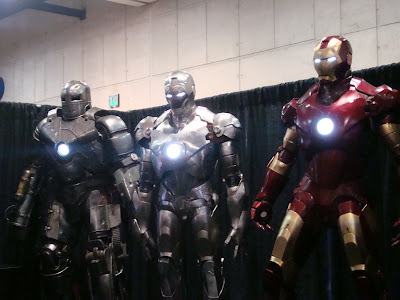 The three major armor upgrades from the Iron Man film. I think Terence Howard was sealed up in one of them for $5 an hour. 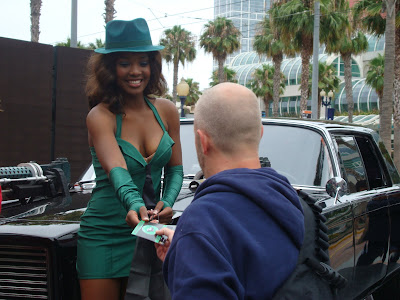 Quite honestly the only positive aspect of the Green Hornet movie promotion. 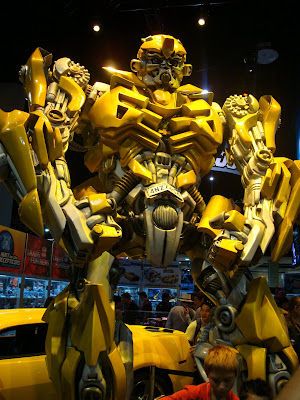 Bumblebee from the Transformers movies. This one especially delighted little kids...and teenagers...and adults who should no better than to be delighted by anything from Michael Bay. 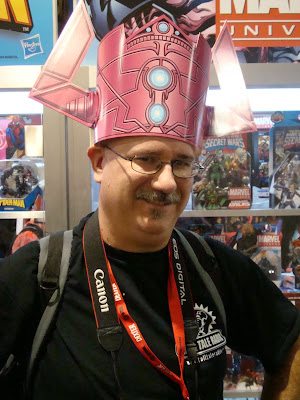 Tall Tale Radio's--and San Diego's--own Tom Racine, sporting the millinery must-have of Comic Con (second runner-up was a knitted winter cap from Firefly) A great big thanks to both Tom and his family for being so good to me during my visit! 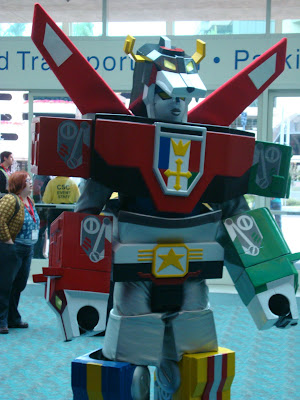 What was either one man or five midgets combined in a Voltron outfit. 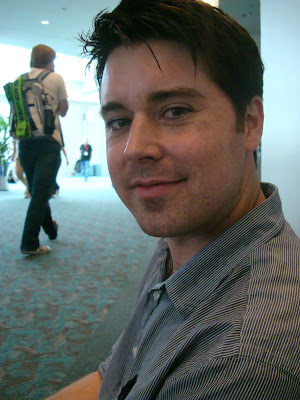 My good buddy, great comic editor and Comic Con roommate Brendan. When we arrived at our hotel suite Brendan called top bunk. Then I realized there was only one bed. Clearly I did not read my King Features contract carefully. (Actually, we stayed at a very lovely hotel that was too good for the likes of me, to which I owe Brendan a huge thank you!) 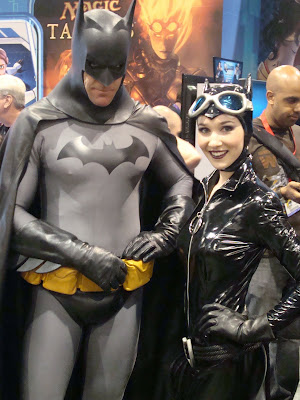 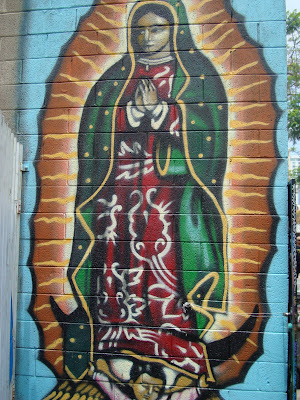 The more cliche the Virgin Mary iconography the better the tacos in San Diego. In this one the Mother of Jesus is either being held aloft by a small child (abusive) or a rather strong midget (adorable!) 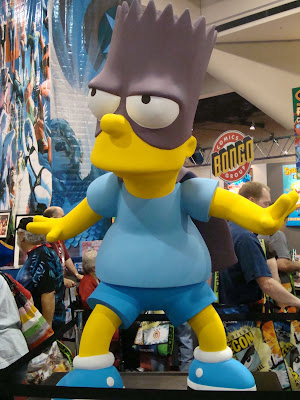 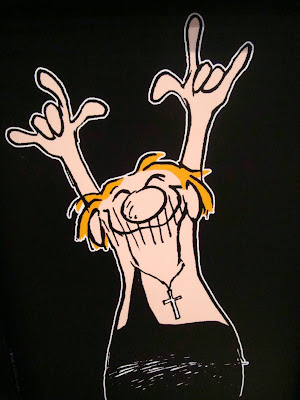 The B.C. character wearing a cross at the National Cartoonist Society booth, both dismissing the very conceit of the comic strip as well as any thoughts that Johnny Hart could still not be batshit insane even in death. 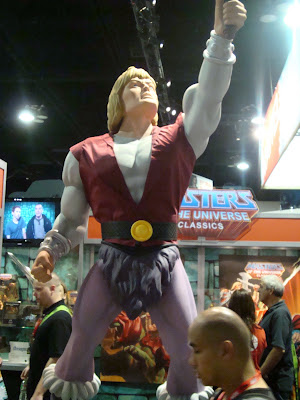 If the train station signs are written in Klingon, it must be San Diego Comic Con (or we're trapped in the elaborate fantasy of a 16-year-old Radio Shack employee): 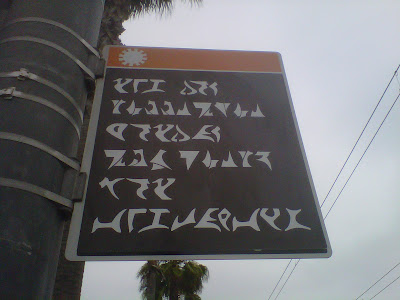 Yes, I'm here at Comic Con in San Diego's very charming Gaslight District (so named, I imagined, because the area slowly convinces everyone they are insane). I'm sharing a room with my good friend Brendan of King Features at The Westage, a magnificent hotel designed to resemble Versailles, right down to the curious lack of electrical outlets.

Last night was the first phase of Comic Con--Preview Night--an exclusive event in which every single person alive with a badge or who can convince security detail that these are not the droids they are looking can get a sneak peek at the 179,452 booths. It was quite fun as I spent my time with two great guys, cartoonist Lucas Turnbloom of Imagine This fame (who autographed a copy of his new comic collection for me) and Tom Racine, host of the must-listen for comic strip fans Tall Tales Radio (and whose the mellifluous voice should always be followed by the phrase "as heard on Mercury Theatre").

Naturally, numerous extraordinary and eccentric sights were seen, but thanks to forgetting the camera connection for my laptop and there not being a single electronics store in the Gaslight District (hence the slowly go insane part), I can only share a few less-than-crisp pics I took with my Blackberry until I procure said link (which I've just learned aforementioned mensch Tom Racine did for me). So here is a close-up of one of the finest automobiles to ever ride the streets of Manhattan: 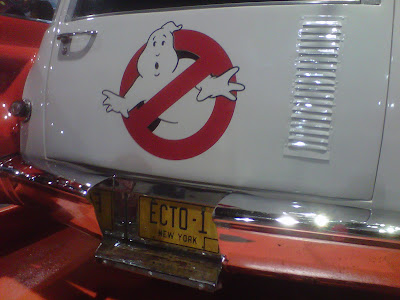 And what is either the Valhalla set from the upcoming Thor movie or the executive bathroom scene from Goldiggers of 1933: 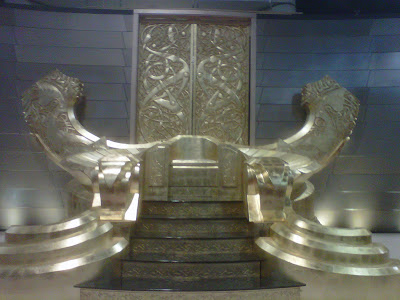 Of course, the single greatest moment for me was meeting and shaking the hand of one of my greatest idols--a man who has had a tremendous impact on both my personal and professional life--Berke Breathed, seen here signing my Bloom County collection (and commenting on what a Southern Italian name I have) in front of, well, a Rockekteer poster: 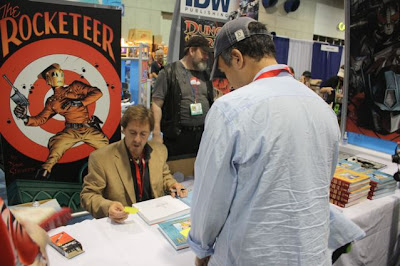 Today I'm attending the hotly anticipated Tron Legacy preview (or, to put it more accurately, probably getting shut out off the hotly anticipated Tron Legacy preview) and maybe getting within 47 miles of Angelina Jolie at her Salt panel. So stay tuned and next time I'll try to do a blog post with more current references than Charles Boyer films, Orson Welles theater troupes and the Sun King.
Posted by Francesco Marciuliano at 10:56 AM 3 comments:

The Single Best Worst Piece of Art EVER!

Michael Jackson remembered in a way no one can ever possibly forget. 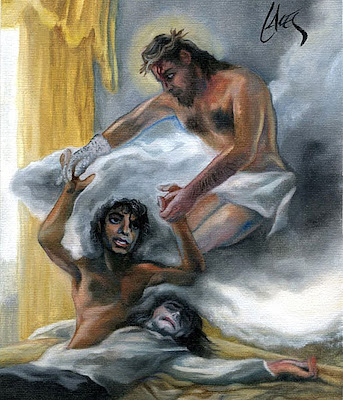 Thanks to my friend Dan for the heads-up!
Posted by Francesco Marciuliano at 5:03 PM 13 comments:

Hey, everybody! I'll be at San Diego Comic Con this week, wandering around aimlessly, suffering from sensory overload and avoiding furries by any means necessary, including suicide. I'll also be posting photos, articles and maybe video of me stalking Zoe Saldana.

If you're going and you'd like to meet up, just say hi or tell me in person how I'm the worst thing to happen to Sally Forth since Sally Forth, this is what I look like: 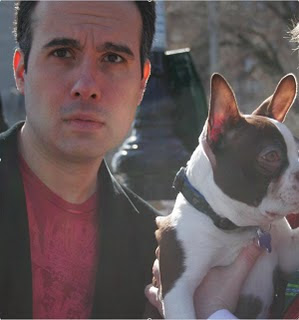 I will probably not have the dog (since it's not mine). I could bring my cat but she's 17 years old. Plus, I'd look crazy if I did. Unless I did so while dressed in the standard comic convention Princess Leia slave girl outfit from Return of the Jedi. I do think I could pull that off, though. I have the legs for it. That is, if I shave first.

I should shut up now.
Posted by Francesco Marciuliano at 11:54 AM 2 comments:

"I don't like you and you don't like me. But if we focus that mutual hatred on the opposing team maybe we can break their star player's kneecaps or something."

"Only you can love yourself. After all, there's a reason hookers won't kiss you on the lips."

"Some days you feel invincible. But only Superman is invincible. The rest of us could die from a stray bullet or tampered Flinstones chewable like that!"

"I want you all to remember the words of my father--'You're not much to look at but your mother seems to have grown attached to you.'"

"Each day I wake up healthy and alive probably costs me 80 to 100 bucks easy."

"Once there was a train who thought he could...but he couldn't. Got suicidal. Eventually drove itself into a canyon. Hence my new team motto--'No trestles!'"

"Orphans have it easy. No one around expecting them to make something of their lives. The rest of us can only fail in others' eyes."

"One day you'll look back on this very moment and think, 'I could have used this time to nap.'"

"Well, it's not like any of us were planning on becoming professional ballplayers or financially solvent adults any way."

"Listen to your heart, because your mind is only going to remind you how getting an English degree in college was like flushing all your potential down the crapper."

"It's only when you stop needing to win do you realize you've gone six days without shaving or changing your shirt."

"Some people can only brag. Others can only whine. I can spend up to six hours straight humming the theme to Courageous Cat and Minute Mouse."

“Remember--they can't kill you if you're already dead inside."
Posted by Francesco Marciuliano at 9:38 AM 1 comment:

Teenage Girl President Makes a Cameo in Today's "My Cage"! 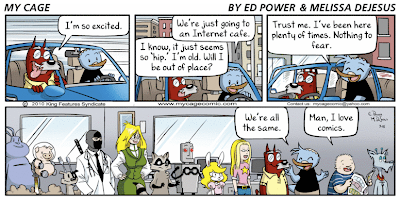 That's our girl, Teenage Girl President herself, in the bottom panel with a whole host of incredible webcomic characters in today's My Cage Sunday strip! Quite the honor indeed!

I want to thank My Cage creators Ed Power and Melissa DeJesus (yes, their surnames spell out the phrase "Power de Jesus") for inviting TGP into their world for a day. But you should read My Cage every day right here. Also make sure to read the strip's official blog (with a rundown of today's webcomic cameos in today's post).

And don't forget to buy the first My Cage compilation book--My Cage: Year One--right here! (More info on the book can be found here.)

Thank you, Ed and Melissa!
Posted by Francesco Marciuliano at 9:46 AM No comments: 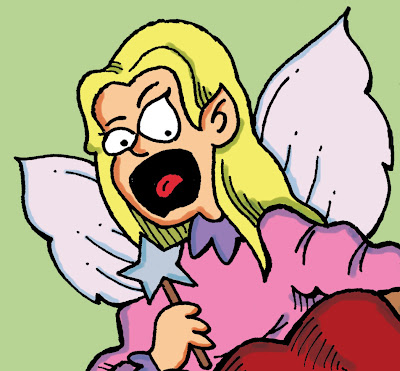