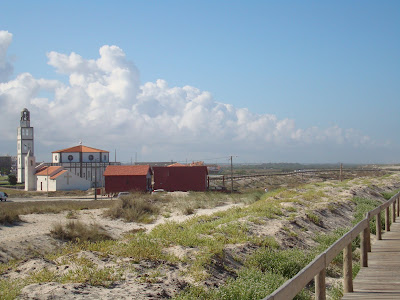 Well, its' August, so once more I head off to the Mother Land...Well, my mother's land...Well...Oh, screw it. I'm going to spend a month on a Portuguese beach writing, jogging and tanning at a rate dermatologists officially refer to as "non-human."

But before I go I'd like to give you kind folks some pointers about a land few people know about outside of...uh...stuff. So here are Five Widely-Held Misconceptions about Portugal:

* The capital of Portugal is not "Like I could give a rat's ass what the capital of Portugal is."
* Not everyone in Portugal is a fisherman. Some are fisherwomen.
* Portugal was indeed once a superpower, ruling half the world...on paper...the Portuguese lost that paper...along with most of their wallets.
* Despite what analysts say, Portugal's current financial situation is no worse than when the nation was first founded under the belief that an entire economy could be supported solely by cork and cod.
* While the land is indeed still overrun by dragons, the great lizards' language in no way resembles Spanish.
Posted by Francesco Marciuliano at 12:27 PM 14 comments: