Because This Week Calls for Something Beautifully Inane

It's been a tough week here so something absolutely pointless, ridiculous, horrifying and, yes, wonderful (in that sick kind of way) is necessary. Hence, courtesy of the must-read music blog Jason Hare.com (especially for those who revel in the mellow music of the 70's and the mistakes of the 80's) comes the video for It’s Flashbeagle, Charlie Brown:


Just a note: According to Jason Hare.com, the male co-singer of this masterpiece is none other than Joey Scarbury, the man who gave us one of my personal faves, Believe It or Not (Theme from "The Greatest American Hero"):

Yesterday I did my first radio interview for NPR (well, for any radio station, actually). It was in response to a Sunday strip I did a few weeks back about comic strips becoming far too serious in their topics and tone and was part of an overall tribute to the upcoming passing of a character on "Funky Winkerbean" (the NPR station broadcasts out of Ohio, the home of the Winkerbean cartoonist).

I rambled for a solid 20 minutes but cannot recall exactly what I said. I mentioned something about Hagar the Horrible discussing sarin gas and Japanese death cults ("I'm telling you, Helga, Aum Shinrikyo is the true light!"). I think I said that if you ever see the characters in "Crock" complaining about subprime loans then you know that cartoonist is about to lose his house. I might have closed by saying that as a kid I identified greatly with Charie Brown, although I had a more varied wardrobe and didn't suffer from prepubescent alopecia. And somewhere in the midde I casually said "Mallard Fillmore" is like that horrible uncle you have to see on holidays who launches into a 45-minute, bile-fueled screed about how Lapplanders moved into his neighborhood.

I don't know what they will use but by September's end when the show is broadcast I'll have once more successfully embarrassed my blood and corporate families.

From now on I'm communicating soley through semiphore.
Posted by Francesco Marciuliano at 5:45 PM 3 comments:

Thank you to everyone who sent such heartfelt emails and comments regarding Boris's passing. It means the world to me.

I'm going to take a few more days off from posting than I had originally planned.

In the meantime, here is a very nice ode to the loss of a pet (and a great essay on the nature of relationships).

Thank you again.
Posted by Francesco Marciuliano at 11:24 AM 1 comment: 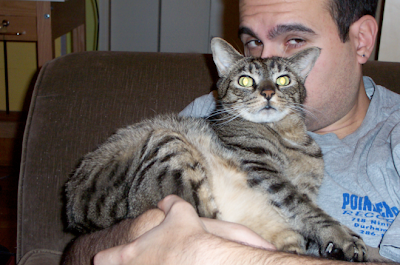 Boris was one of the dearest friends and closest family members I have ever known. He was kind, warm, friendly, empathetic, playful, serene and a whole host of attributes that many people rarely associate with cats. He was so beloved at the animal hospital that after a few visits they began to provide him with free treatment whenever possible. He loved to have his belly rubbed. He was the cat that could convert the dog-lovers. As my friend Sean stated, "Until I met Boris I hated cats. But he wasn't a cat. He was Boris."

Boris helped me through my worst moments and was there at my very best. He was there when I met some of the most important people in my life. He was not my pet. He was one of my most treasured friends and I miss him terribly. I can only hope that he is no longer in pain and is now resting comfortably, surrounded by a never-ending assortment of food and catnip.
Posted by Francesco Marciuliano at 1:10 PM 13 comments: