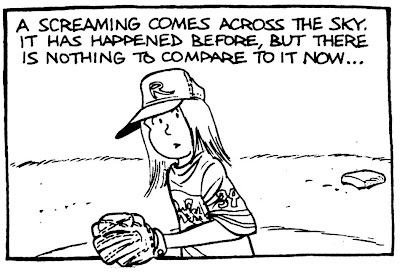 Read the full Sunday comic--brought to you in living color--here.
Posted by Francesco Marciuliano at 1:10 PM 5 comments:

"Nick Jonas, the brooding auteur who gives the Jonas Brothers megabrand a dash of thoughtfulness..."

Ted Forth Gets Canada Talking

Well, one person in Canada. A person who is apparently surprised that Sally Forth is still being printed. A person who refers to Ted Forth as "Milquetoast." A person who...wait, I was going somewhere with this...

Anyways, here's the article for your Monday reading enjoyment: The SALLY FORTH Dude Analyzes Television.

And speaking of old-time television, here is another edition of...

SITCOM THEME MUSIC: ONE DAY AT A TIME

Although it may now be hard to fathom, there once was a time when the very idea of a sitcom about a divorced individual was considered not only revolutionary but also potentially immoral. It's like finding out ABC almost never aired Welcome Back, Kotter because the network feared it would inspire gang violence. Or that The Ghost and Mrs. Muir was almost shelved because it might have been mistaken as an endorsement for necrophilia. Or that The Wonderful World of Disney was almost canned because the show's title sounded just a bit too fabulous for puritan tastes.

But back in the early 1970's divorce was still very much a hot-button topic, like nuclear war, feminism and Evel Knievel's so-called jump over Snake Canyon. In fact, the character of Mary Richards in Mary Tyler Moore was initially conceived as a recent divorcée but producers--fearing a backlash from religious coalitions and anyone who has ever mistaken a baptism for a bullhorn--opted for a "broken engagement" backstory instead (no doubt after weighing such typical late 60's/early 70's sitcom alternatives as "moved to Minneapolis after losing her magical powers," "moved to Minneapolis after her spaceship crashed in southeatern Minnesota" and "moved to Minneapolis after discussing it with her horse, car or enchanted flute"). The overriding idea was never to make television viewers too sad, too irate or too mobilized to notice the commercials...or perhaps confuse them into thinking Mary had just dumped Rob Petrie's ass.

By the mid-70's, however, the network honchos believed that viewers were ready to see sitcoms that didn't so much make them forget their worries as wallow in their miseries. This was the heyday of the "social commentary" sitcom, otherwise known as the "Wait, am I suppose to laugh after hearing Florida's husband just got killed?" formula. Gone were such time-tested plots as "hillbillies get rich," "hillbillies swim naked in water tower" and "hillbillies meet Eva Gabor." In their place were "comedies" about racism, suicide, drug abuse and, in the case of One Day at a Time, marriage gone down the crapper.

Starring Bonnie Franklin, One Day at a Time followed the few triumphs and many travails of recently divorced Ann Romano née Cooper and her two daughters Julia (Mackenzie Phillips) and Barbara (Valerie Bertanelli)--siblings who could only have been related by way of casting--as they laughed, loved and languished in Indianapolis. This was often accompished with the assistance of Dwayne "Florenz" Schneider (Pat Harrington Jr.), the superintendent whose fanatic attachment to the Romano clan was just one plot twist away from him donning a short red wig and disposing of Ann in the apartment building's furnace.

The overall tone of the show is best summed up by its bouncy theme song, penned by Jeff Barry of "Da Doo Ron Ron," "Be My Baby" and "Christmas (Please Come Home)" fame. Taking its cue from the show's subject matter, the lyrics are empowering but never too encouraging, commencing on a note of both resilience and resignation:

Or, to put it another way:

Suck it up. Suck it up.
Wipe those tears, you're on your own
So maybe buy a cat.

The song then ups the ante in the second verse as it segues from a proclamation of "keep your chin up" to "never let your guard down":

This is it. This is it
Straight ahead and rest assured
You can’t be sure at all.

You might be walking down the street
Minding your own business
When suddenly BAM! Falling jet turbine.

What's most striking about the theme song in the first two verses is the notion of "This is it." On the one hand it strikes a rather final, almost futile chord, one seemingly at odds with a show about second chances. It's like hearing a disapproving parent say "You made your bed now lie in it" or "Fingers don't grow back, now do they?" But on the other hand "This is it" can serve as a wake-up call, a realization of life's transitory nature and the need both to make the most of what it has to offer and make a stand in the face of adveristy. It's another way of saying, "If life gives me lemons then I'll make hard lemonade" or "I've got two fists for fighting and one finger for the world."

However, not wanting to turn into the equivalent of "I Am Woman (So Hear Me Alternately Roar and Sob Copiuosly into My Macramé Pillow), the lyrics take a turn for the decidedly hopeful and heartening in the third verse:

These were invigorating--if not downright imperative--words for a generation still reeling from such calamaties as Watergate, Vietnam, stagflation, the OPEC oil crisis, Children of God and prog rock. Yes, we as a nation had been through some tough times. And we as a nation could only expect to face further woes (read: 1980's). But as long as we had the strength of Bonnie Franklin's character (a trait that came in good stead after her divorce, after her boyfriend was killed in a car crash, after she had to raise her boyfriend's son alone, after her eldest daughter abandoned her own family and--in a very special holiday episode--after she was knifed by St. Nick), the spunkiness of Valerie Berinelli's character and the countless kilos of pure Bolivian snow that made Mackenzie Phillips such a character, we'd be able to get through any plot device. And so in celebration of that very realization, the song concludes on a note of optimism and a nod to The Hustle:

So remember, whenever you find yourself feeling particularly despondent, whenever you feel as if life's demands are proving far too overwhelming, whenever you feel as if the only way out of your problems is through inhaling carbon monoxide, injesting sleeping pills or inquring about that job in marketing, have no fear. Just remember that "this is it," "have a ball" and "buy a cat."
Posted by Francesco Marciuliano at 10:15 AM 3 comments:

Word from "Mega Shark" Producer Himself

Just wanted to drop you a line to say thanks for the surprising splash into pop culture. It didn't get me laid, but your strip was still a great, amazing, and fantastic surprise.