While my first Bizarro regrettably required that the reader to be of a particular age to get the joke (something I hadn't thought of even though it's proven a common dilemma whenever Ted goes off on another pop culture tangent), today's entry immediately speaks to everyone's memory of the fabled Tonsil Fairy, a sprite who never should have dropped out of law school.

I actually like this strip partly because it isn't a pop culture riff and partly because, quite honestly, it made me laugh when I first drew it. I also like how, judging from my shadowing, the light source appears to be a lamp inexplicably turned upright on the floor between the fairy and the sleeping child (which is another way of my saying I fucked up).

Some of you may not know this but there are actually four versions for each and every Bizarro daily strip you see, something I was not made aware of until I accepted Dan Piraro's generous offer to guest host his comic. First there is the example at the top of this post, a panel-size version done in full-color. Then there is the black & white version for newspapers who choose not to print their weekday funnies in color: 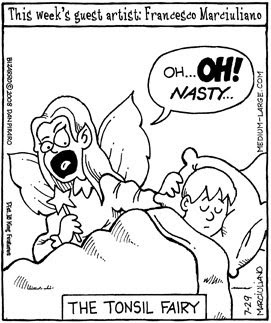 In addition to the panel version, there are also black & white and color classic strip versions, which are often far more accommodating for newspaper real estate:

Dan Piraro colors his strips himself and so I had to as well--something else he failed to inform me before I accepted the task. He also told me that he does not get paid in any usual currency but rather in Chiclets, of which I will get some after FICA. He also said I to clean and paint his two-story apartment, feed, care for and--curiously enough--clothe his ever-growing menagerie of sick or motherless animals and do a dance he called "The Humiliation," in which I twisted for six hours straight in a tea dress while he laughed, insulted and filmed me.

Please join me tomorrow for my next guest Bizarro strip, otherwise known as "the one that will get me hate mail."
Posted by Francesco Marciuliano at 1:20 PM

okay, they both had me giggling out loud. nicely done!...now i'll go tell dan he can relax. (wink)

now i may have to visit your blog on a regular basis!

With all those care and feeding requirements, he didn't happen to leave his wife behind, did he?